Come and Take It Radio - The Future

Come and Take It Radio is currently on hiatus due to a conflict in Matt's work schedule. We are currently looking into alternatives to a live show, such as podcasting.

Good afternoon, today we start the show discussing a you tube video that the London Telegraph featured on their website regarding Japan and the ongoing radiation situation in Fukushima. However, it isn't the exact same as the video posted here, which is the original - http://www.youtube.com/watch?v=yp9iJ3pPuL8&feature=player_embedded. The London Telegraph aired the same exact video but with NO radiation levels on the screen like the original video. See it here - http://www.telegraph.co.uk/news/worldnews/asia/japan/8438076/Around-Fukushima-the-dead-zone.html.

We switch topics and discuss the recent reports that Oprah will not publicly endorse Barack Obama in the 2012 Presidential Election and that Glen Beck's show on FOX will end this year.

We start the 2nd hour on some gun-related topics including an article on gunowners.org, Ex-con vs Pink Pistol - http://gunowners.org/excon-vs-pinkpistol.htm. We also discuss the website 'Jews for the Preservation of Firearm Ownership' - http://jpfo.org/

We end the show on an article from blacklistednews.com 'A Militarized Economy Cannot Balance the Budget' - http://www.blacklistednews.com/A_Militarized_Economy_Cannot_Balance_the_Budget/13426/0/38/38/Y/M.html
Posted by Come and Take It Radio at 1:04 PM

Good afternoon, today we are back live! We start the show discussing the current state of Japan. I touch on the recent decision by Apple to not accept an app that can monitor radiation levels that has been in production for 20 months and had sparked interest to Apple. The app was for detecting radiation levels from mobile phone use but now that Japan has radioactive water, consequently they are "not interested". Read it here - http://www.infowars.com/apple-rejects-iphone-4-radiation-metering-app/

We also discuss 'TEPCO Admits To Another Cover Up As Radioactivity In Seawater Near Fukushima Soars To 1,251 Above Legal Limit' found here - http://www.zerohedge.com/article/tepco-admits-another-cover-radioactivity-seawater-near-fukushima-soars-1251-above-legal-limi

Evidently there is some yellow rain in Japan as well but don't worry it's just pollen according to Japan Today - http://www.blacklistednews.com/Yellow_Rain_Falls_In_Tokyo%3F_Pollen_Excuse_Exact_Same_As_Chernobyl_Yellow_Rain_Lie/13200/0/6/6/Y/M.html

We move onto the current situation in Libya and mention some common dates in history.

MARCH 19, 2011
OBAMA: 'Today we are part of a broad coalition. We are answering the calls of a threatened people. And we are acting in the interests of the United States and the world'...

MARCH 19, 2003
BUSH: 'American and coalition forces are in the early stages of military operations to disarm Iraq, to free its people and to defend the world from grave danger'...

We play a clip of Joe Biden from 2007 regarding George Bush and the Iraq War as people question whether Obama can be impeached for this strike on Libya - http://www.youtube.com/watch?v=Adpa5kYUhCA&feature=player_embedded

We then play a series of recent Ron Paul clips and his stance on the situation in Libya -
We end the show with a clip of Cam Edwards reading the NRA letter response to President Obama's op-ed on gun laws - http://www.ammoland.com/2011/03/16/nra-response-to-president-obamas-op-ed-on-gun-laws/

Good afternoon. Today we start the show on our favorite topic, 2nd Amendment. We continue discussing the Texans for Accountable Government 'Cash for Guns' event that took place last weekend in competition of APDs 'Guns for Grocery' event. We play a video clip from World News Daily - http://www.wnd.com/index.php?fa=PAGE.view&pageId=269349.

We then move on to a story out of Illinois, evident there is a FOID fight brewing over gun owner privacy - http://www.kfvs12.com/Global/story.asp?S=14175901.

Moving on to an article by Kurt Nimmo on Obama's recent visit with mexican reporters at the White House. Evidently they think Obama should just repeal the 2nd amendment - http://www.infowars.com/obama-deceptively-answers-second-amendment-question/

In the second hour we change topics to the Middle East and the gossip of a 'day of rage' March 11th. From FOX News - http://www.youtube.com/watch?v=4xf2mfQZMPo&feature=player_embedded. Lindsey Williams says MI6 funds the Muslim Brotherhood - http://www.youtube.com/watch?v=zNC0V8l7OLk&feature=player_embedded
Posted by Come and Take It Radio at 1:04 PM

Good afternoon, today we start the show discussing some options when there may not be power or a if we experience gas shortage, etc. We then move on to discuss the never-ending conflicts in the Middle East, including an article from blacklistednews.com, http://blacklistednews.com/Middle-East-Chaos%3A-What-To-Learn-And-What-To-Expect/12844/0/5/5/Y/M.html

We spend the 2nd hour talking about the 'Gun For Groceries' program that ran in Austin this morning. Texans for Accountable Government (TAG) also ran their own 'Cash For Guns' but on public property next to the APD event. Here's the local FOX piece on it - http://www.myfoxaustin.com/dpp/top_stories/Group-Will-Offer-Cash-for-Guns-201102-ktbcw

Good afternoon, we start the show today discussing an email alert from Gun Owners of America we received yesterday. According to the GOA, the same Federal Aviation Administration (FAA) reauthorization which provided a vote on the repeal of ObamaCare may well be the vehicle for a series of gun control proposal. Read the article here and send your Senators a pre-written message - http://gunowners.org/a020411.htm.

We then move on to an issue that took place statewide here in Texas on Thursday. The State implemented "rolling blackouts" to conserve power in case of extreme weather. However others have said that it is possible Texas was in danger of exceeding their carbon credit allotment allowed by the EPA. We then discuss global warming a bit and also touch on Al Gore's recent statement regarding the extreme cold - http://www.newsmax.com/InsideCover/Gore-Record-Cold-Global/2011/02/02/id/384729?s=al&promo_code=B96C-1.

We then discuss the upcoming Superbowl and the DHS commercial that is supposed to air regarding their 'See Something, Say Something' campaign. Here's Napolitano's press release - http://www.youtube.com/watch?v=gXfyGrDil9E.

Moving on to the recent ruling against the healthcare bill, with the Judge citing Obama's own words - http://www.washingtontimes.com/news/2011/jan/31/judge-uses-obamas-words-against-him/

We end the show discussing energy independence and ways to achieve it in case of emergency.

Thanks for listening, catch ya next week.
Posted by Come and Take It Radio at 1:04 PM

Shop Our Affiliates (Right Click to Open in a New Window) 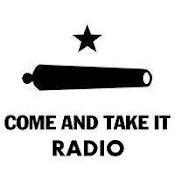